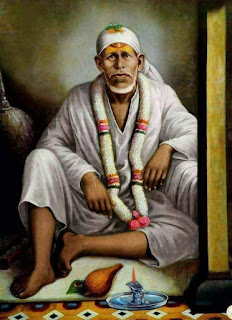 This famous and beautiful portrait is a masterpiece and is widely known as "DwarakaMai pose)...Traditionally the mother is the care giver. When the father return home after working all day, the child's runs to him. The child who has been playing  outside is covered by dust and has runny nose. The father will invariably call mother to clean the child. The mother on other hand is oblivious to the snort and dust , ,lovingly she hold her child close to her bosom and cleans him. When the child is clean and has proper clothes on , the father says "this child is mine".
With the analogy the Dwarakamai pose, is interpreted. .Baba sits  to the railing and His form is a triangle with the apex bilva leaf on it.It signifies "Mount Meru"the abode of Mother Parvathi..So He is the Mother calling children (us) to come and take refugee in Him. The kakad arathi says"Tu shanti ksmeca meru ho..Tu bharvarnavice taru guruvara"(You are the mountain Meru of peace and forgiveness. You are the bark ferries us across this mundane existence. .
His left hand rest on railing and all finger are visible. Each finger is a sort of Mudra could mean-
1)..The three Gunas-Rajo , Tama and Satva..
2).The three Shariras-Stoola, Shuksma and Karana..
3).The Indryias with Ashidvargas,
4)..The five Pranas-prana, apana, udana , samana and Vyana ..
5) The five koshas - the five sheaths are Annamaya kosha, Pranamaya Kosha, Manomaya kosha , vigyanamaya kosha and Anandmaya kosha..
The middle ring and iliitle finger on the left are turned in and represent manas , budhi and chitta.These are inside every jeev atma.While the index finger is out and pointing down, this could represent "Aham"(pride and ego).This could also represent "the compassionate mother saying, "Come with all faults, ,pride of earthly possessions and ego , My lap is always there to rock you My child. ".
The right leg is bent at knee so the child can lie there...The left keg is firmly planted on the ground representing firmness of resolves. ..Baba saying, "I am firm in My promise to accept you , ,and if you take one step , I will take ten steps towards to you.
The thumb which represents the Parabrahma is turned in pointing to Himself. ..It's the Sadguru or Parabrahma who can cleanse the jeev atma of all these impurities and undesirable traits.
This  could be the repsentation of  this beautiful Dwarakamai portrait at Shirdi...

Popular posts from this blog 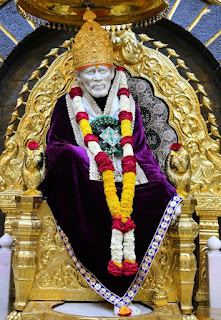 When clouds are full of water, it rains like anything on earth..The Same ways blessings and happiness will shower on you..Believe on my words: Shirdi SaiBaba#ShirdiSaiBabsWords
Read more 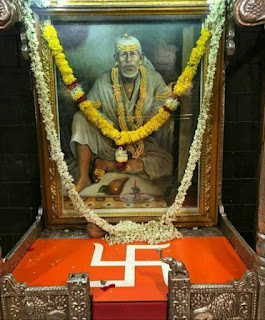 Do you really believe in your guru? Do you have faith in your guru? If yes then why doubt appear in your mind when you take important decisions of your life. Why do you feel that whether the decision will go correct or not? Remember that you should take decision with complete surrender in your guru then doubt will not appear: Shirdi Sai Baba #ShirdiSaiBabaWords
Read more 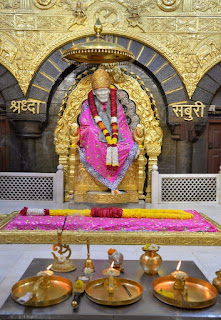 People have hopes and when they lose them..it breaks their heart..but the truth is that everything happens as per man's deeds that he had done in his previous life..but , even if the man believes god and keep faith in him..the Malik (god) will surely confer his Grace upon him: Shirdi Sai Baba #ShirdiSaiBabaWords
Read more 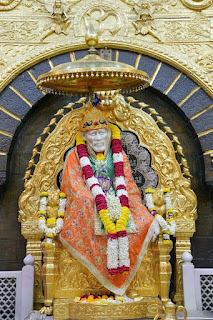 My devotee feel sad when he faces many problems and not able to find any solution...he pray to me with heavy heart for help and my heart melts seeing him in painful situation and I run to him to help : Shirdi Sai Baba #ShirdiSaiBabaWirds
Read more 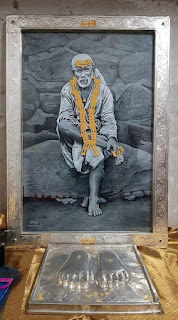 If you think that after going Shirdi all your problems will be resolved immediately..It is not possible but yes your problems will be reduced to some extent..You have to bear your own Karmas..You can't escape from your Karmas..And once your bad karmas over..You will be free from problems: Shirdi  Sai Baba #ShirdiSai BabaWords
Read more

This Blog is protected by DMCA.com

This work is licensed under a Creative Commons Attribution-NonCommercial-NoDerivatives 4.0 International License.